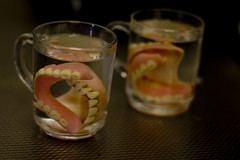 Have you ever had the feeling that something was stolen from right under your nose? Gladys Petti has—but rather, from right inside her mouth.

The 94-year-old woman went to Clearchoice Implants in Buckhead, Georgia to have her dentures permanently implanted, but left with more than she bargained for… or perhaps, less… The gold bars that Petti previously implanted into her jaw, to which her dental implants were secured, were later found to have been removed during her procedure at Clearchoice Implants. Her new dentist estimated that more or less an ounce of gold was stolen from Petti’s mouth.

The procedure was performed in November of 2010, and in addition to the gold being stolen, the denture she received that day broke only one year later. Petti is suing the dental company for $100,000, which includes the $9,300 that she paid for the apparently sub-par procedure. Clearchoice has offered to return the gold bar, but Petti denied, stating it had been so long, she would not be sure if the bar was actually hers. They have also offered to give her a full refund, but the wronged woman is seeking more.

While normal, glued-in dentures are prone to becoming loose and even falling out when users speak and eat, dental implants are much sturdier. They are secured to the jaw by screws, allowing a much more care-free experience. They both look and act like natural teeth and are long-lasting.

The implants are even good for your mouth in the long run, as the presence of the screws trick your body into thinking that your teeth are still present, thus prompting the jaw bone to continue growing. Such implants can be used in the place of single teeth or to support entire sets of dentures.

If you would like to earn money for your dental scrap before it is stolen right out of your mouth, be sure to check out CashforDentalScrap.com. Cash for Dental Scrap guarantees you will be paid top dollar for your precious metal scrap, including crowns, bridges, inlays, and onlays.