What Goes into a Filling?

What Goes into a Filling? 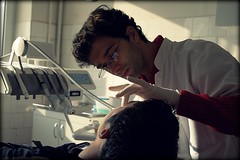 There are a variety of reasons to go to the dentist—and while the health of your mouth should come first, the aesthetic value of properly cared-for teeth is undeniable. But if everyone wants a bright white smile, why are unsightly metals often used to fill cavities? Even if the fillings are not directly in the smile line, they will inevitably be seen while you talk and laugh. Keeping this in mind, let’s take a look at the different kinds of fillings available and evaluate the pros and cons of each.

Dental amalgam is used to create the silver-colored fillings that are so commonly seen. Such fillings are made with a combination of elemental mercury and a powdered alloy composed of silver, tin, and copper. This is the least expensive material that is typically used to fill cavities, and dental amalgam fillings typically last at least 10 to 15 years.

The downsides of dental amalgam are twofold. First, the safety of the elemental mercury content has been a source of controversy. The Food and Drug Administration (FDA), however, maintains that the amount of elemental mercury present in dental fillings poses no threat to adults and children over the age of six. Second, in addition to the silver fillings standing out on their own, they can contribute to the discoloration of the tooth. For these reasons, dental amalgam is typically used to fill cavities in the molars in the back of the mouth where they are less likely to be seen.

A gold filling will have comparable durability and strength to an amalgam filling, but the precious metal is significantly more expensive. Cast gold fillings also require at least two office visits to set in, and their aesthetic value is up for debate. Some people find the presence of gold in their mouths appealing while others would rather have their fillings be as discreet as possible.

Composite fillings are the most visually unobtrusive. They are composed of synthetic resins, and their color can be matched fairly well to that of one’s teeth. In addition to this admittedly superficial advantage, composite fillings also chemically bond to the tooth, proving additional support to its already damaged structure. Despite these benefits, composite fillings still tend to wear out faster than metal fillings do, and they are also more expensive.

If your dental office has an excess of dental scrap, including gold and silver crowns, bridges, and pfms, Cash for Dental Scrap will pay you top dollar for it all. Contact us today to find out how easy it can be to turn your unwanted dental scrap into cash.